A private beta proposes revising Heroku's free plans to limit activity to 12 hours a day for a single 512MB dyno rather than the current 24/7 free service. In its place is a $7-a-month, always-on Hobbyists plan. Heroku's plan proposal could be a boon to commercial developers, however. It follows the recent release of Heroku Enterprise, which emphasizes support for distributed development teams.

Early reports of a change in Heroku's pricing may signal a shift in the company's marketing strategy a few months after its acquisition by Salesforce. ReadWrite's Lauren Orsini writes in an April 1, 2015, article that participants in a private beta of the service were shown the new pricing scheme.

At present, Heroku's free service allows use of a single 512MB dyno for up to 24 hours a day, seven days a week. The proposed pricing plan would limit the dyno to 12 hours a day, while a new $7-a-month Hobby plan would allow you to run such an app 24/7 with a maximum of one dyno per Procfile entry.

March 30, 2015, blog entry by Eric Jiang, who is a participant in the Heroku private beta. Jiang points out that a single 512MB dyno can now power sites with tens of thousands of hits per hour. Since most web apps run comfortably inside a single web dyno, there's no need for worker dynos. This means Heroku gets paid only through add-ons, most of which are offered by third parties.

According to Jiang, few apps could live in the free tier under the new pricing model, so nearly all developers would have to sign up for the $7-a-month plan. The other Heroku plans are Standard 1X, 2X supporting multiple dynos per Procfile and offering 512MB or 1GB RAM for $25 or $50 per dyno per month; and Performance for high-performance apps to 6GB RAM and costing $500 per dyno per month. 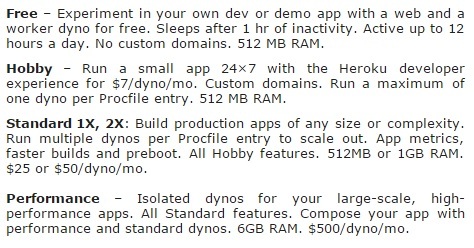 Heroku's proposed pricing changes to its service plans would require nearly all developers to sign up for a fee-based account. Source: Eric Jiang

Developers responded to the proposed changes in Heroku pricing plans in a Y Combinator Hacker News forum. One poster questioned the efficacy of a plan providing only 12 hours a day of run time. While there are a handful of legitimate use cases for such a plan, it's thought that Heroku may be discouraging some developers whose apps would start on the free plan but would ultimately expand to a paid plan.

Perhaps the most obvious free alternative is the free plan offered by Amazon Web Services, which provides 24/7 access to a "smallish" app for up to one year. Some developers see the change as beneficial in that the existing free tier's limitations are difficult to work around, and many paid tiers are actually going down in price.

Several commenters caution that Heroku's proposed plan changes were presented as part of a private beta, so there's a likelihood that the proposal hasn't been finalized. Others note that their apps need far less than 512MB, so they propose that Heroku offer a plan with a size limit closer to 128MB. 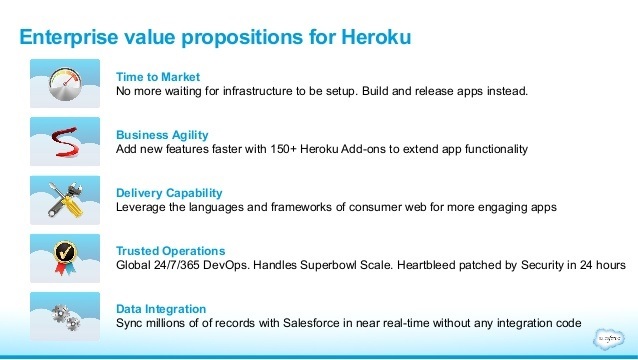 The most efficient and economical way to monitor your apps, databases, IT operations, and business services is to use the Happy Apps application-management service. Happy Apps lets you set up rules so you are alerted via SMS and email whenever incidents or specific events occur. You can group and monitor multiple apps, databases, web servers, and app servers. In addition to an overall status, you can view the status of each individual group member.

Happy Apps is the only app-management service to support SSH and agent-based connectivity to all your apps on public, private, and hybrid clouds. The service provides dependency maps for determining the impact your IT systems will have on other apps. All checks performed on your apps are collected in easy-to-read reports that can be analyzed to identify repeating patterns and performance glitches over time. Visit the Happy Apps site for pricing information and to sign up for a free trial.